A Texas judge has ruled that the Affordable Care Act is unconstitutional. For now, his decision has no immediate effect except to toss another fire bomb at a law that has helped 20-plus million people gain insurance and expanded insurance for almost all Americans by such things as requiring insurers to cover pre-existing conditions.

Based on our expertise as health policy scholars, we argue that the ACA is well-settled law by now. This ruling will likely not undo the law. It does, however, add more uncertainty to the ACA while also showing how much Republicans continue to be willing to fight to destroy the law.

How did we get to the Texas verdict?

Republicans in Congress spent much of 2017 seeking to repeal and replace the Affordable Care Act. After repeated failed attempts, they celebrated a victory with the passage of the Tax Cuts and Jobs Act of 2017. The tax bill included the repeal of the ACA’s individual shared responsibility penalty, or the penalty imposed on individuals who fail to purchase qualified insurance coverage.

Health policy experts agreed that this would destabilize the individual insurance market without destroying the ACA. And indeed, enrollment in the ACA insurance marketplaces has been decidedly lower this year. Yet, millions of Americans continue to enroll, and a number of states are moving toward expanding Medicaid.

Emboldened by the legislative success of GOP tax reform, however, 20 states, led by Texas and Wisconsin, renewed their efforts to have the ACA declared unconstitutional.

They got every wish. Texas Judge Reed O’Connor struck down the Affordable Care Act as unconstitutional in its entirety.

Politics heavily shaped this case. Republican-led states sought a friendly judge in a Texas district court to yet again challenge the constitutionality of the ACA. And California took over the defense of the ACA when the Department of Justice refused to defend its own law.

While many experts anticipated that Judge O'Connor would rule against the ACA, legal experts from both sides of the aisle were baffled by his legal reasoning and the departing from well-established legal precedent.

What’s in the verdict? 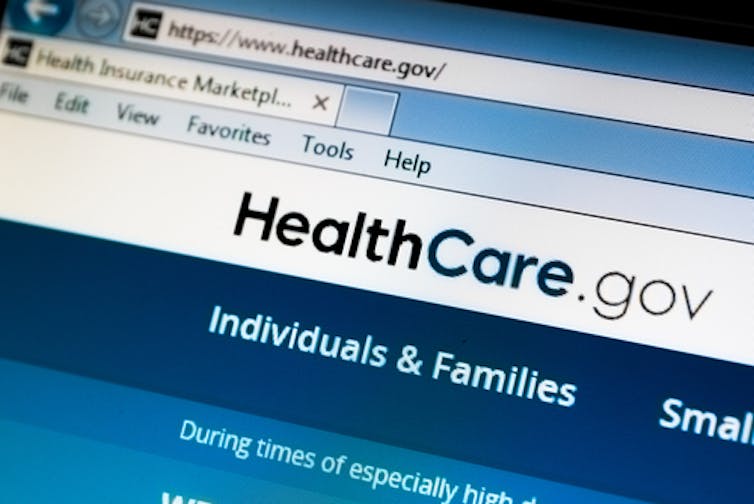 Open enrollment for 2019 ended Dec. 15, 2018. A judge in Texas ruled on Dec. 14 that the ACA is unconstitutional. txking/Shutterstock.com

First, O’Connor agreed with the plaintiffs that they have standing to bring this case. The plaintiffs argued that the individual mandate injures their constitutional rights by forcing them to buy health insurance.

Yet ironically, it is the elimination of the tax penalty that prompted this lawsuit. O’Connor suggested that people will feel nonetheless beholden to follow the law even without the penalty. We find the argument that an unenforced law can cause harm is absurd and merits serious reconsideration on appeal.

Yet, we think that once more Judge O'Connor ignored reasonable arguments. For one, California argued there are still ways in which the mandate functions as a tax, as some unpaid funds will still be collected in the future. Additionally, many related provisions of the ACA remain intact such as hardship exemptions and reporting requirements.

Moreover, the original rejection of the individual mandate in NFIB v. Sebelius was that it violated the commerce clause of the Constitution by coercing consumers. This may no longer be valid with the penalty being zeroed out.

This issue is, in some ways, the lowest stakes part of the case, as the new tax law ends the penalty (and effectively the individual mandate) on Jan. 1, 2019. But it does control whether the third issue – severability – arises. And, there is symbolic value in being allowed to say that no aspect of the ACA is unconstitutional.

Last, in what we consider the most drastic and overstepping aspect of the opinion, Judge O’Connor kills the entire ACA. Emphasizing how “essential” the mandate is to the law, he states that Congress would not want any of it to stand without the individual mandate. Yet, Congress did speak in 2017. It did not repeal the whole of the ACA when they effectively wiped out the individual mandate. It must have thought the rest of the ACA could stand without the mandate.

While important, the individual mandate also does not render the ACA completely worthless. The mandate, which had been used as the stick to enforce compliance, may be gone, but carrots like subsidies to purchase insurance remain and will keep many people in the insurance market.

Wending its way to the Supreme Court?

So what’s next? California has indicated that it intends to appeal the matter to the 5th Circuit Court (which covers Texas, Louisiana and Mississippi), but it is possible that Judge O'Connor may sit on the case for a period before this can happen. We believe that if the 5th Circuit is reasonable, it will overturn the verdict.

At the same time, another suit filed in district court in Maryland asks that the ACA be deemed constitutional and that the complete law remain intact.

Actions of these two courts will determine whether there is sufficient uncertainty or danger to the ACA to merit the Supreme Court’s review.

Meanwhile, while heartburn medicine sales may have risen and Twitter has gone alight, in practice, nothing changes. Judge O’Connor did not issue any injunction to stop the enforcement of the ACA. And for now, the Trump administration has indicated that it will continue to enforce the law until ultimately settled.

Ultimately, the weakness of plaintiffs’ case means this litigation will likely end, whenever it does, with the ACA largely intact. But in the meantime uncertainty and confusion will reign, and politicians will spin well-worn narratives that the ACA is fundamentally flawed and unlawful.

What if the ruling is upheld?

If the ruling is ultimately upheld, and the ACA really is dead for good, the changes for the American health care system, and every American, would be dramatic.

Of course, most directly affected would be those Americans who obtained coverage through either the Medicaid expansion or in the insurance marketplaces. The popular provision that allows young adults to stay on their parents’ plan would also be undone.

Any large scale changes would cause dramatic harm to the entire U.S. health care system, and affect each and every American whether they rely on employer-sponsored insurance, other private insurance, or Medicaid and Medicare.

Even eight years after the its passage, many Americans do not fully grasp the sheer reach of ACA provisions. Look no further than its more than a thousand pages as evidence of its depth and scope.

More crucially, gone would be protections for Americans with pre-existing conditions. Gone would also be provisions that eliminate annual and lifetime restrictions by insurers, and the requirement for insurers to provide a minimum level of benefits including mental health, substance abuse and emergency room services.

Gone would also be the filling of the Medicare Part D donut hole that hurt many seniors.

Gone would be provisions that combat fraud and abuse in Medicaid and Medicare.

Gone would be provisions for coal miners suffering from black lung and their survivors.

As we stated before, we believe the ACA should be settled law both in the courts of law and public opinion. It should also finally be settled in the court of politics.

In our view, this frivolous lawsuit and the equally frivolous ruling should not distract us from the serious work ahead in addressing the inadequacies of the American health care system.

This article is republished from The Conversation under a Creative Commons license. Read the original article.

About Viktor Frankl and the Meaning of Life.

Curious Kids: What was the first computer?

Science is deeply imaginative: why is this treated as a secret?

Life Lessons: 25 Things You Should Not Do

Mind Hacks: 4 Cognitive Biases You Can Use To Your Advantage

Meditation: 5 Reasons To Not Do It

What You Should Know About Economics

Office Politics: How To Play The Game And Win It

Emotional Intelligence: What Is It And How Do We Develop It? Part 2

10 Days On Tinder – Artwork Made From Screenshots Of Tinder Profiles

Emotional Intelligence: What Is It And How Do We Develop It? Part 1

Investors, consumers and workers are changing capitalism for the better by demanding companies behave more responsibly

Facebook’s Libra: it’s not the ‘crypto’ that’s the issue, it’s the organisation behind it

The hypersane are among us, if only we are prepared to look

Optimism: 5 steps to go from being a pessimist to an optimist

Being and drunkenness: how to party like an existentialist

Why Epicurean ideas suit the challenges of modern secular life

Austin Butler: 5 facts to know about the star to play Elvis Presley in his biopic

What big history says about how royal women exercise power

Richard Feynman was wrong about beauty and truth in science

The Freddie Mercury story that goes untold in 'Bohemian Rhapsody'

Sex robots are here, but laws aren't keeping up with the ethical and privacy issues they raise

The bad news on human nature, in 10 findings from psychology

How slaveholders in the Caribbean maintained control

How to Decorate Walls in a Signature Way with Wallpics Photo Tiles?

My Personal Experience of Passing Microsoft 70-480: Programming in HTML5 with JavaScript and CSS3

About Aubrey O'Day: Quick Facts You Should Know

Socrates And His Thoughts on Technology

How Billy Graham’s legacy lives on in American life

Despotism is all around us: the warnings of Montesquieu

About Mitch Hedberg and his comedy

Gender is dead, long live gender: just what is ‘performativity’?

Har Gobind Khorana - Google honors the biochemist with a doodle

Hello I'm Dolly: A look at the life of Dolly Parton

What psychiatrists have to say about holiday blue

The life and times of Foo Fighters' fighter, Dave Grohl

He died as he lived: David Hume, philosopher and infidel

Clint Eastwood: A look at the life of legendary Hollywood badass

About Andy Rooney and the life's truth according to him

The wit and humor of Groucho Marx

A Brief History of the Motorcycle

Most Well-Read Cities in America

A look at the life of Chris Cornell

A look at the life of Gregg Allman of Allman Brothers

Happy Red Nose Day. But, What is it?

Willie Nelson Death Hoax: It was just a rumor, after all